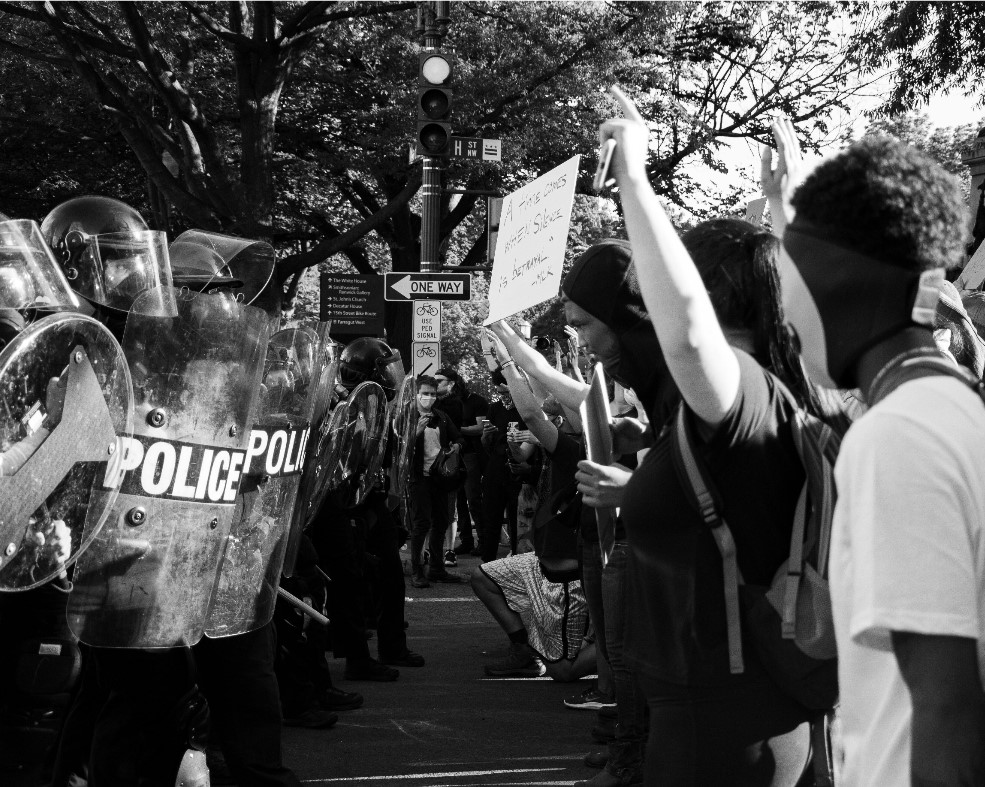 It is impossible to escape the horror of what happened to George Floyd on May 25. The ongoing racism and police brutality displayed by law enforcement is something to be addressed head–on as it’s a public health issue. Although this public health issue is often overlooked, it has a long and heartbreaking history in the U.S., one closely associated with race and one which has not improved over time.

In the following post, we explain what police brutality is, its close association to racism, and how protestors and activists are working to prevent future incidences of police brutality.

Police brutality is defined as the excessive, often illegal force that is used against civilians by police officers. Many times police brutality is physical, but it can also be emotional, encompassing instances of harassment, intimidation, and verbal abuse. Police brutality directly leads to premature death and illness and is, therefore, a very pressing public health issue.

Although anyone can experience police brutality, members of the Black and African American community, along with other people of color (POC), are at the most significant risk to experience patterns of brutality attributed to racism. It’s inflamed further by the identity of law enforcement teams, wherein many areas of the U.S. are predominantly white, and have a culture of authority that disproportionately, often exclusively, benefits the white population.

Effects on People of Color

During their lives, 1 out of every 1,000 Black men dies from police brutality. Some argue that that cases of brutality are far and few between. Although this may be the case, law enforcement as an institution was built on racist values and to oppress POC.

Police brutality can lead to injury and death. Incarceration has similar outcomes. Those in prison have a higher chance of contracting diabetes, high blood pressure, and HIV. They are also likely to experience mental illness.

This mental illness is experienced by more than those faced with police violence and incarceration. Police routinely target POC, causing them anxiety in their daily lives. The villainization of black individuals is rooted in the history of the U.S. and has not lessened over time. Because POC are unjustly targeted by police, participating in daily life means experiencing constant worry that you could be targeted for no reason other than the color of your skin. It’s this reality that makes Black and African American adults 20% more likely to develop psychological distress.

What happened to George Floyd is tragic, but it is not unique. His case is one of many that have been shared among news outlets and on social media in recent years. You might have read about stories of others, like, Ahmaud Arbery, Atatiana Jefferson, Breonna Taylor, Korryn Gaines, Pamela Turner, Regis Korchinski Paquet, Sandra Bland, Shantel Davis, and Tony Mcdade, all of whom were victims of police brutality. Perhaps more disheartening than these cases are all those who have gone unspoken, unreported, and even unknown throughout history. To stop history from repeating, we must acknowledge the need for change, the need for accountability, and steps towards these.

The Path Towards Change

Even as protestors seek justice, police are acting out with rage and violence. Demonstrators are demanding justice on several levels with various groups taking different stances on the issues. Some individuals feel that reforming how police interact with civilians is a good jumping–off point. Heavily backed Campaign Zero’s 8 Can’t Wait has the goal of limiting police interventions by finding other, more peaceful,  routes to end conflict. Their plan for change features a built-out ten-prong approach. Their 8 Can’t Wait Campaign is working to ban police chokeholds, require a warning before shooting, and increase police accountability in various ways.

Accountability is heavily needed as Mapping Police Violence found that, in the last seven years, 99% of killings caused by police resulting in no criminal charges towards the law enforcement officers(s) involved. Their website hosts several data points that show how such changes can have on the number of POC killed due to police brutality.

Other groups, like Black Lives Matters, Reclaim the Block, Colors of Change, Black Visions Collective, and the American Civil Liberties Union are pulling together resources and support to defund the police. Defunding the police can mean reducing existing future policing, reducing spending in the law enforcement sector, and reallocated it into communities of color. Some groups are demanding the abolition of police altogether. They favor replacing law enforcement officials with first responders, therapists, and other trained professionals who can help minimize conflict peacefully and constructively.

By outlawing police brutality, there will be fewer deaths and an improvement in the mental health of POC who, at present, experience a great deal of trauma concerning first or even second-hand cases of this injustice.

COVID-19, which has had an astounding number of just under 2 million cases confirmed, has been responsible for an increase in police brutality. Patterns show a more considerable amount of violence by police when it comes to enforcing the wearing of masks in public places. Not surprising is the trend that most of the enforcement is aimed towards people of color.

While some argue that masks are more critical for these communities since case numbers in people of color are more substantial, this draws attention to the fact that COVID-19 has links to systemic racism in many ways. A lack of economic opportunity and marginalization force POC into jobs deemed essential, putting them at a higher risk for contracting the virus. Systemic racism puts constraints on POC’s finances, effecting their living situation and health, all of which make members of this community more susceptible to contracting the disease.

Healthcare professionals are also predicting a surge of COVID-19 cases following these protests. The rise in cases may be blamed on less social distancing but could be more closely associated with the police brutality occurring during the protests. Police in many cities are using tear gas to break up demonstrations. Tear gas causes burning and itching of the eyes, runny noses, and coughing. Such reactions to the gas can cause more respiratory droplets to enter the atmosphere. These droplets can get on clothing, skin, making it easy for COVID-19 to spread.

How do we stop this from happening? End police brutality.

Want to learn more about the Black Lives Matters Movement?

What is Asynchronous Telehealth?

Examining the Lifespans of COVID-19 and Racism

Health Disparities in the Black Community

A History of U.S. Medical Education and Organizations

Zombie Fires in the Arctic: Can They Affect Human Health?

3 Reasons to Defer Your Application for Residency